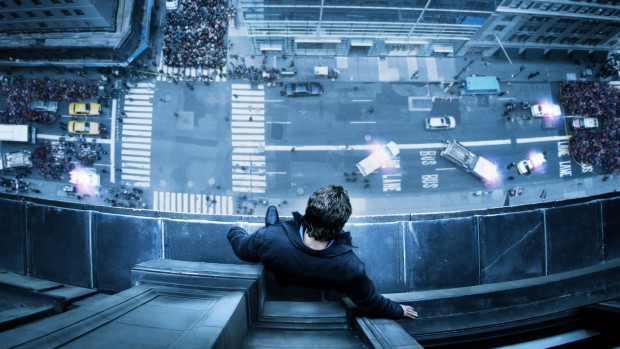 Man on a Ledge was probably not this film’s first title. It sells it poorly.

From the title and trailers you may expect, as I did, a high-concept thrill ride, stuffed with irony, like Snakes on a Plane or Phone Booth. Sadly, Man on a Ledge has no interest in staying exclusively on the ledge, nor in not taking itself seriously, and that makes for a disappointing and somewhat uncomfortable hour and a half.

Early on, the film feels appropriately parodic – one of the very first shots shows Nick Cassidy (Sam Worthington) looking up at the high ledge he will come to occupy, and within four minutes he climbs out of a window and onto it. The film doesn’t hang around – it gets right to the business at hand, and it’s exciting and a little silly. The film’s called Man on a Ledge, and the first man we see heads straight up to a ledge. Brilliant.

We flash back a month. Cassidy is in jail, and tells his psychiatrist that he thinks about killing himself every day. Hold on, wasn’t this meant to be funny? Is he actually going to jump off that ledge? Despite the seriousness of someone standing on a ledge it never seemed that we’d actually be confronted with the possibility of death. Surely there was always going to be a happy ending? What’s going on? The film’s tone takes a plunge and we have to re-evaluate what we’re seeing.

Unfortunately, that re-evaluation makes it clear that the promise of high-concept daftness won’t be kept, and it quickly becomes clear that the film has no interest in any genuine examination of the cry-for-help that is climbing onto a window ledge, leaving only an intense feeling of having been let down. Man on a Ledge turns out to be a fairly formulaic thriller in which dull revelations occur left, right and centre. The tension raised by the flashback soon subsides – in a 12A-rated blockbuster, it’s hard to truly believe that Cassidy will kill himself, and we begin to realise that he has no intention of doing so anyway.  This leads to a feeling of having been cheated into an emotional response by the false prospect of suicide, which is far from pleasant. Nonetheless, we learn that Cassidy’s hiding something from the police who try to negotiate him off the ledge, and a small network of subterfuge, influence and corruption is uncovered, all of which is very hard to care about given the manipulative first few minutes.

In every other respect, the film is utterly unremarkable. It looks like a thriller should, it features an appropriate soundtrack, and the atrocious, hobbling Worthington is carried through the film by a squadron of decent actors. Elizabeth Banks gives the best performance, convincing as a negotiator who is tortured by the memory of a policeman whose suicide she was unable to prevent (though having said that, when he turns up alive, revealing that he faked his death, her response is nothing more than a raised eyebrow that says, ‘Oh, you!’)

It’s a shame that the film’s first opening is so uneven and treats the audience with such disrespect. Silly though it sounds, it’s the fault of the title and advertising. Approach Man on a Ledge expecting a standard thriller (as is surely the original intention of the filmmakers), and it could be a serviceable, competent thriller with little to truly dislike. As it is, it’s a serviceable, competent thriller with one ill-judged moment to truly dislike and an irremediable aura of dissatisfaction that results from believing that you’ve been duped into expecting something very different. Unfortunately, that moment and aura make the film a profound disappointment.