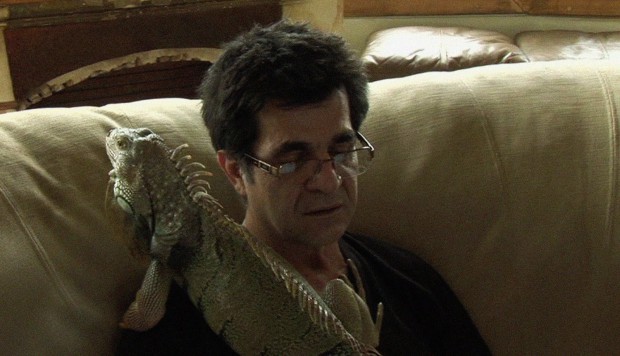 When René Magritte painted a picture of a pipe and gave it the caption, ‘Ceci n’est pas une pipe,’ he was making a smart and humorous artistic statement: this is a representation of a pipe using paint, not an actual pipe. When, however, following a banal sequence of shots depicting Iranian filmmaker Jafar Panahi’s morning routine, the words “This Is Not a Film” appear on the cinema screen, the effect is very different. Despite the allusion to Magritte’s painting, these words connote something more aggressive. Panahi is making a political assertion, not a joke. His twenty-year ban on directing films, and six-year prison sentence, make this title defiant and powerful. On the one hand, it introduces the tricky question of what the boundaries of the medium of film are; on the other, it aggressively challenges the authorities that threaten his career and life.

It’s useful to go into This Is Not a Film forearmed with background information, as the conditions of Panahi’s punishment aren’t made clear until some way into the film. (For the avoidance of doubt, the film tells, and indeed forms part of, a true story.) Following arrests in 2009 and 2010, throughout the film’s duration Panahi is awaiting the result of an appeal against the filmmaking ban and prison sentence he’s been given for purportedly intending to produce anti-Iranian propaganda. (It remains unclear whether Panahi is under house arrest or not – briefly filming outdoors, he’s told by an acquaintance not to walk any further, but it seems that this is because he’ll be seen with the camera, rather than simply be seen outside.) Famously, This Is Not a Film was smuggled into Cannes on a USB stick concealed within a cake. To be fair, in the background lies the main appeal of the film, and you’re unlikely to see the film (or even read this review) without knowing some of it. 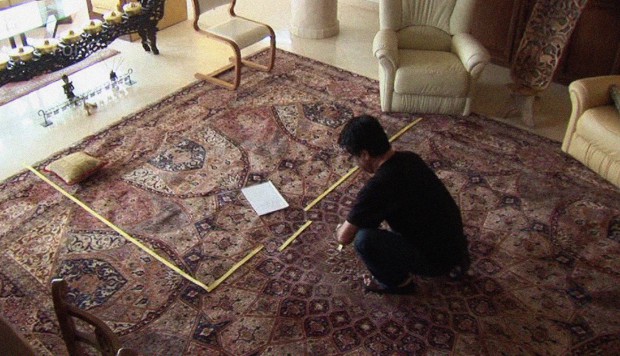 Bored and alone at the start of the day, Panahi invites his friend, Mojtaba Mirtahmasb, over to ‘discuss an idea’ with him, and Mirtahmasb simply begins filming Panahi as he talks. Panahi brings out the script for the film he had been intending to make when the authorities came calling, a story about a girl who, having been accepted into university, is punished by her traditionalist family, who keep her in her room. He identifies that although he’s banned for two decades from directing or writing films, giving interviews or leaving the country, there’s no mention of reading and acting out a screenplay. Cheekily, he shares a laugh with Mirtahmasb at the absurdity of the ban, and wastes no time in exploiting the difficulties inherent in defining ‘directing’, and indeed in assigning directorial responsibility in a collaboration.

Panahi puts tape down onto a rug to delineate the layout of the girl’s room, and places in it a cushion and chair that respectively represent a pillow and window, then begins to read out the directions and dialogue. This, surely, doesn’t count as making a film. It’s just documenting the script so that it can be appreciated in some form. Panahi describes camera angles that aren’t adopted by Mirtahmasb. He says, “cut”, and his cameraman ignores him. Memorably, he despairs, “If we could tell a film, then why make a film?” But no. It’s clear that Panahi’s in charge.

There are moments in the film where it’s abundantly clear that this is a considered creative work that is under Panahi’s strict control. It’s his idea to act out his script, in which the girl’s imprisonment in her home by heavy-handed, out-of-touch parents mirrors his own situation. Later, when acting it out, he says, “cut”, and the shot does cut to another this time. A scene in which he films a conversation with the boy who collects the trash in his apartment high-rise takes place in the lift, just about the most restricted location one could imagine; Panahi is exaggerating his claustrophobic conditions, as if to say, ‘Fuck you, I can still shoot a film. This is too easy. You can’t imagine the lengths I’ll go to.’ Late in the film, both Mirtahmasb’s professional camera and Panahi’s iPhone are used to film at the same time, and regular cutting between the simultaneous shots takes place, somewhat aping typical shot-reverse-shot structure, although never so strongly that it becomes unsubtle. He films himself in the morning, eating breakfast and feeding his pet iguana, only to later denounce those shots as “lies” – but the shots all stay in, and refer to each other. Fireworks go off outside to celebrate the New Year; later, we catch the TV news announcing a presidential ban on fireworks. The literal interpretation of the title is not something we’re really able to buy into – we’re watching a film. Even though the credits say only, “An effort by Mojtaba Mirtahmasb and Jafar Panahi”, they’re clearly both responsible for the film’s direction, no matter how much they’d like to obfuscate the issue. Raw and basic as its form may be, This Is Not a Film shows control and intelligence in its design. We don’t hear about the firework ban by accident, it’s deliberately included in the edit. Choices have been made about what to shoot and what to cut together. There’s even a callback involving a dog. This self-referentiality and somewhat light tone are enjoyable, and the latter is unexpected, given the gravity of Panahi’s situation. But I came to see this as something of a flaw in the film: the filmmaking ban is so flagrantly flouted and mocked that it’s hard to take the authorities seriously as a threat. (Of course, it’s hard to take such an absurd ban and prison sentence seriously, but the fact that they can be enforced ought to be terrifying.) Panahi isn’t just exploring the boundaries of the ban, he’s quite plainly showing two fingers to the powers that be, and unfortunately, although it should be invigorating and empowering to see someone under the threat of having his free speech revoked fighting back so brazenly, the punishments he faces never feel like they have any weight to them.

The form of This Is Not a Film ties into its content much more thoroughly than in a comparable documentary such as The Greatest Movie Ever Sold (2011), in which the self-referential, postmodern form feels like an almost entirely separate project to the content about film advertising. This Is Not a Film’s form is vital and political – the silver lining to the cloud of Panahi’s ban is the fact that without it this film literally could not have been made, and it’s a succulent irony. The film isn’t without its flaws, but it’s intriguing and unique filmmaking, mixing fly-on-the-wall style documentary footage with moments that feel as prepared as any in a typical narrative film, and it’s a testament to Panahi’s strength in the face of an appalling removal of free expression, and his will and ability to adapt to the restricted conditions of the ban. He’s unable to stop directing, even filming out of his window when he’s bored. When he turns his iPhone on Mirtahmasb, he’s told, “When hairdressers get bored, they cut each others’ hair. We’re doing the same thing.” Respecting the ban isn’t worth considering. Panahi’s natural state is looking through a lens, even when he’s in front of someone else’s.

Join 35 other followers
Follow Writing About Film on WordPress.com