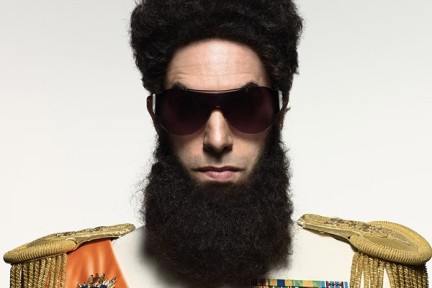 I should have known better.

I’ve been burned by Larry Charles before. A director known for his work in documentary and with improvisation, he seems promising when you hear that he’s directed several episodes of Curb Your Enthusiasm (2000-2011). But I’ve never seen any episode of that show that I thought was poor. Put those actors together and let them improvise and it’s probably pretty difficult to fully fuck it up in the edit. His first film with Sacha Baron Cohen was Borat (2006), which was funny when it was, like the TV sketches in which he appeared, spontaneous and reliant on interactions with people who weren’t in on the joke; the staged parts that were included to sell the plot were artificial, out of place and unfunny. The anti-religion documentary Religulous (2008) was unfocused and insubstantial, attributes which were only magnified by the finale in which, in an attempt to look like the film’s points were being tied together beautifully, apocalyptic music played while we were told how religion would lead to the destruction of humanity, a conclusion which the rest of the film failed to support. His second collaboration with Baron Cohen, Brüno (2009), had the same problems as Borat, except that the character was far less funny, the satire less edgy- oh, and the spontaneous bits also fell completely flat this time, alongside the scripted bits.

So now we have The Dictator (2012), in which spontaneity is totally thrown out of the window in favour of a planned, scripted film. Unfortunately, the trailer, with its use of real footage of world leaders, apparent understanding of bathos and blatantly silly tone, drew me in.

Admiral General Aladeen (Baron Cohen) is a clone of Colonel Gaddafi, a power-crazed, borderline mentally ill dictator of a country named Wadiya. On a visit to the UN headquarters in New York City, his uncle and advisor Tamir (Sir Ben Kingsley, somehow) arranges for him to be kidnapped, tortured and replaced by a dunce of a decoy who can be easily manipulated into democratising the country, allowing American businesses in. Having had his beard shaved off by the hitman (John C. Reilly), Aladeen escapes and tries to put himself back in power, needing to engage with the American way of life along the way. What results is essentially Coming to America (1988), except that this time the jokes aren’t funny and the racism is ironic. (Yes, while The Dictator is atrocious, it does, at least superficially, understand the difference between genuine institutional racism and the ironic use of racist jokes.)

Baron Cohen is usually very good at playing the extreme caricatures for which he’s known (Ali G, Borat and Bruno), delivering witty lines with deceptively intelligent comic emphasis and timing, and infusing their physical presence with convincing and (again) deceptively subtle use of gesture. This is less the case with Aladeen than with any other character he has created, which I’d like to think is because not playing him in real-life situations in front of unsuspecting people as he did with the other characters prevented Baron Cohen from needing to create the believable nuances he is so adept at developing, although according to Charles the character was partially developed through this type of improv. (During an in-character interview on The Daily Show, Aladeen was little more than a louder, broader Borat.) Aladeen’s characterisation is unimaginative and plain; when he is forced onto the streets of New York and finds a job at Zoey’s (Anna Faris) organic, hippy, right-on, politically correct, environmentally friendly health food shop, the (mild) change in his character to one of expletory incomprehension and outrage is all too predictable. Despite the clear attempt to make him a loveably hubristic and unintelligent man, he’s always unsympathetic. Perhaps worst of all, he’s simply forgettable.

The Larry Charles problem – that is, his inability to direct scripted comedy – ties in to an extraordinarily unfunny script. There are plenty of decent ideas in there, that much is clear: Aladeen changes several Wadiyan words to ‘Aladeen’, a concept based on Turkmen dictator Saparmurat Niyazov, which has the potential to be developed as an exploration of how the restriction of language effects the restriction of thought… instead, it’s used to deliver a cheap gag and is quickly discarded. The dangerously capricious behaviour of an insane but powerful man is, again, used to deliver lame jokes (particularly a running one in which Aladeen sends people to be executed for more and more banal transgressions, such as accidentally bumping into him on a flight of stairs) – on The Peter Serafinowicz Show, Peter Serafinowicz‘s Marlon Brando impersonation made the same point more humourously in a little over six minutes. Few individual gags are actually funny (though Baron Cohen manages to elicit a few laughs with them through sheer chutzpah), and they’re often telegraphed with contrived and absurd set-ups. With writing as poor as this, Charles certainly has a task on to make the film good, and indeed he can’t – in fact, he achieves the incredible result of making the jokes seem even worse than they actually are. There’s nothing taut about his editing, nothing creative about his shots – jokes unfold slowly, over bafflingly badly timed cuts that let pauses in the poorly-delivered dialogue fester, and he exhibits next to no understanding of how to shoot scripted comedy (on the few occasions on which I laughed due to a joke delivered or augmented through cinematic style, I was reluctant to think that Charles really knew what he was doing). Take a scene in which Aladeen, visiting his chief scientist, Nadal (Jason Mantzoukas) is outraged that the missile they are developing has a curved top, as he believes it should be pointy; Nadal works out that all of Aladeen’s preconceptions about what a missile is have come from cartoons. It’s a decent comic idea which is executed hopelessly with clumsily written and stiltedly recited dialogue delivered by inert characters who possess no chemistry, charisma or charm. Charles frames the action unimaginatively and destroys what little energy the scene does have by choosing apparently random edit points, building no rhythm whatsoever. Scene after scene this happens. The implication that the filmmakers consider The Dictator to be in any condition to be seen by a paying audience is genuinely insulting.

It’s not just individual scenes but the entire trajectory of the film that is tragically paced and contentually unrigourous. Aladeen feels no attraction to Zoey until the plot demands that he ought to, which is pretty typical of mediocre films, but the speed with which Aladeen goes from feeling nothing whatsoever to becoming obsessed with her is astonishing, happening over a scene change. It’s almost as though the writers didn’t put any thought in. In its desperation to find comedy the film aimlessly jumps between subjects with no importance to the plot, characters or themes at all, which wouldn’t be so bad if the film was set up as little more than a joke delivery system (like Airplane! [1980], Anchorman [2004] or even the Austin Powers trilogy at times [1997-2002]) – but The Dictator constantly acts like it has something to say, making every diversion an annoyance. Only at the climax does the film finally feel like it has a satirical point to make, in a speech that for once I don’t think I’m being too kind in suggesting is a knowing and deliberate parody of Charlie Chaplin’s speech in The Great Dictator (1940), in which Aladeen expresses his love for dictatorships, going on to unwittingly describe the USA as one. It’s just a shame that by this point I was so fatigued by the barrage of poor filmmaking that I stoically refused to even chuckle.

However, despite the negativity in this review, I actually did laugh on at least six or seven occasions. Unfortunately, every time I did I felt ashamed of myself, which shouldn’t really be the reaction a comedy film is going for. I laughed at jokes and moments that were actually funny, as opposed to in spite of myself; there really are a few decent jokes littered about, but every time I stumbled across one I hated myself for feeling generous enough to produce laughter. I didn’t want to like even a tiny part of a film that was on the whole appallingly constructed, and clearly unaware of how terrible its jokes are as it relentlessly flung them my way. Any gag that landed felt like an accident that the filmmakers didn’t understand or even recognise. (The joke I probably found funniest, concerning Zoey’s shop, landed because of how aggressive and unexpected it was. It’s very much an outlier though, sadly.)

There is a case to be made for the film’s virtue as a haven of tastelessness. Like The Human Centipede 2 (2011), The Dictator is regularly horrid, admittedly through the medium of offensive jokes rather than sadistic body horror. As with Borat in particular, the film delights in making jokes that make you shudder with the feeling that there’s no need to be going this far, and such gags are sold energetically. (It’s arguably a silver lining to the cloud of the shoddy linking of jokes with themes, as if these jokes felt like they were making a thematic point it would damage the interpretation that they’re being delivered for their own sake.) It certainly seems to be what Baron Cohen likes doing best as he gets into costume, puts on his accent and starts casually tossing around wildly transgressive slurs directly at the minorities (and genders) for which they’re meant, with ludicrous confidence. Simply doing the undoable and saying the unsayable is quite affirming, and while, of course, it never approaches The Human Centipede 2‘s level of heresy, the film does deserve some plaudits simply for its attitude.

I heartily recommend The Dictator as a remarkably effective lesson on how to get comedy wrong in just about every conceivable way. I really struggle to see what other reviewers have found so entertaining and even enlightening about it, which troubles me. Usually I can see the point of those with whom I disagree. On this occasion I feel as though I’m from another planet. Even The Guardian gave it four stars. I mean, for Aladeen’s sake…

For the curious amongst you, here are those Serafinowicz sketches: